Exciting news! My feature script – Arresting God – has made it to the next round of the Sundance Development track! This script has been the labor of two years that I wrestled with the morality of the Iraq war and the violence that extinguished so many lives, both in Iraq and here at home in the hate crimes that targeted Sikh and Muslim Americans. The title of the film comes from the practice of dervish dancing. The dance becomes a symbol for how we engage and protest the political realities by never giving up. In the film, the act of Arresting God is to do the hard work that’s needed to restore wholeness to a world that’s so broken by war and violence.

The news about Sundance came during a week where we’re making sense of two more mass shootings, one clearly motivated by racism and hate. As I heard the names of victims being spoken out loud, my heart broke into pieces. I feel this urgency more than ever to create stories that move us toward each other, not from each other. Stories that can deepen our curiosity about our differences. Stories that sharpen our moral imagination and fuel the argument for being alive. 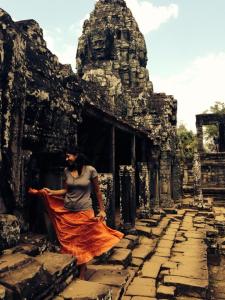